A Tale of Two Quarters 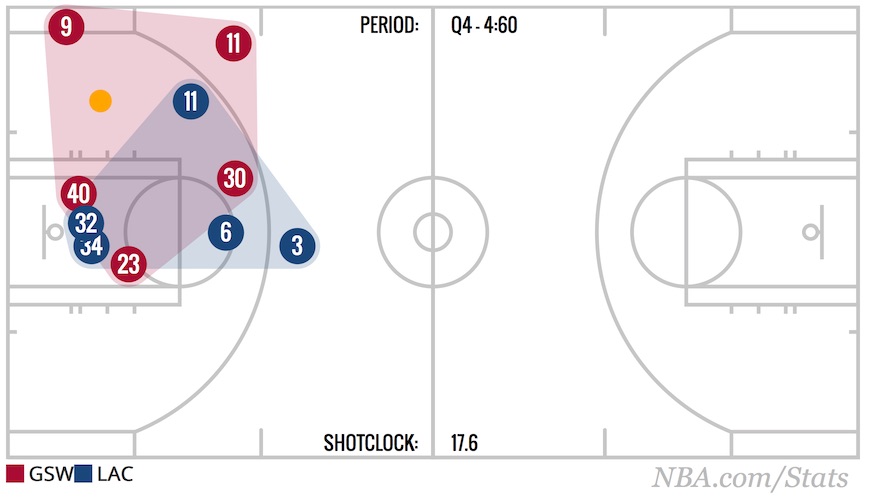 Chris Paul was marvelous in the first quarter. He was aggressive and made Curry defend[1]Both of Curry’s fouls were drawn by Paul., sinking all of his seven shot attempts. The Clippers could not have hoped for a better start. They neutralized the Warriors’ top threat and ran their offense smoothly.

The script completely flipped. Though if you ask the Warriors, nothing changed for them. They stayed the course and trusted their system, confident in their championship ability. Curry got hot. The Clips defense broke down, leading to two wide open 3-pointers for Andre Iguodala.[2]Doc and the Clippers say it was part of the plan to concede 3’s to Andre, given his historically weaker 3-point percentage. But when he’s wide open, things have broken down.

Check out one of Iggy's 3-pointers in this nifty movement tracker from stats.nba.com. It starts with a Pierce triple and then the good stuff starts around 5:06 left in the quarter. Curry (#30) brings the ball up and is guarded by CP3 (#3). Draymond (#23), guarded by DeAndre Jordan (#6), comes over to set a high pick far beyond the 3-point line, while other three Warriors bunch on the far side of the court. This is some of the power of small-ball: the Clippers top rim-protector is beyond the 3-point arc. Then, CP3 and DeAndre trap Curry, and Draymond is left with a wide-open path toward the basket (around 5:02 left). Curry tosses it to Draymond and Pierce is forced to slide over, while Griffin moves to cover Pierce's man Harrison Barnes (#40). This leaves Iggy (#9) wide open. If Jamal Crawford slides over, he's leaving Klay open... not the best idea.

Is there anything the Clippers could have done? CP3 and DeAndre could have switched, but DeAndre on Curry is risky, and CP3 doesn't want to leave his man. Successfully trapping Curry with that much surrounding open space is quite tricky. CP3 does a decent job getting around the pick, so maybe DeAndre could have stayed on Draymond, but Curry only needs minimal space to get his shot off. Failing those options, once Draymond gets the ball with open space, CP3 or DeAndre needs to slide over to Klay so the rest of the defense can rotate. Instead, CP3 is left by himself at the top of the arc, and by then it's already too late.

Like the Warriors in the first quarter, the Clippers still shot a good 3-point field goal percentage in the fourth quarter, but not nearly as well as the opposing team. And overall, the Clips shooting percentage was poor. The Clippers did not stay the course and trust their offensive system, instead going to several CP3 and Griffin one-on-ones (or one-on-twos) and playing with fear.

Shaq said on TNT after the game that you can see it “in the eyes”. The Warriors did not get scared of losing this game, and knew they had a good chance of coming back. The Clippers on the other hand, know all-to-well how to give up a large lead, and their offense simply did not flow as it did earlier in the game. From the coaches, the fans, the players, and even The Truth, you could tell they were flustered.

Something needs to change for the Clippers in these situations. Perhaps they should have left Josh Smith in down the stretch[3]The Clippers bench outscored the Warriors bench 25 to 17., who’s been on the other side of this situation. Most likely though the change will have to come from the leaders on the team: CP3, Griffin, and Doc Rivers.

The Warriors stand at 13-0. Curry is playing at an unbelievable level and no matter what a defense is going to have trouble with the Warriors offense. Although the Clippers managed to get off to a spectacular start and a 23-point lead, they couldn’t stop the Warriors engine from gaining steam. And once the Warriors get momentum, they are damn hard to slow down.